If you live in north London, do be aware that Dunn’s bakers in Crouch End is doing deliveries of basic items:

Just on the subject of restaurants, it is very common in mid-price restaurants, especially chains, to find hordes of kids running around using it as a playground. The adults will be off in a corner laughing and drinking wine, and the children will be running round, screaming, knocking over tables, even breaking glasses and annoying everyone else, at least until one of them gets hurt and starts crying, loudly.

Look through the window of any restaurant you are interested in, and if you see kids, go elsewhere.

My worst experience was at a local place. The kids were maybe 5 or 6 years old, running around and playing hide and seek behind other customers. Why I went in I have no idea.

Then one of them was sick on my coat which was hanging on my chair. UK restaurants don’t do cloakrooms, or even hangars.

The parents thought this was very funny. I did not. When I started to complain, a rather burly father (I suppose) got up and started to threaten me. Surely my kids had done the same? No, no kids here. I was told to shut the fuck up (or else a punch perhaps).

The waiter was very apologetic. He helped me clean up, and I went elsewhere.

Just so you know.

One of the worst things about traveling on your own, and probably the only thing that always concerns me, is eating out. Now, I love a nice meal, in comfortable surroundings, with a glass of wine or two and friendly service, and I always leave a good tip. But it is something that is quite hard to do.

Go into a restaurant on your own and ask for a table and you get one of three reactions:

The first is very rare. If you find a place that accepts single folk and serves good food, treasure it.

The third is most common, in London and in much of the UK. The restaurant does not have to serve you, or anyone, and at least you know where you stand. You can appreciate they would rather have two people at a table than one, but I always try to eat at quiet times and surely an occupied table is better than an empty one?

The second reaction is the most common. Actually, in London, even in a couple or group, you are frequently given a time limit. Get out by X or else… Personally, I think it is a reflection of their speed of service in cases like this.

My worst experience was at a well known pizza chain in a very large branch on the south bank of the Thames. This is somewhere that seats maybe two hundred people. I arrived at around 4.30pm. Even though maybe 10 people were in there, I could have a table only until 5pm.

I ordered starter, pizza and a drink. Drink and starter came quickly, as did the bill! Then there was a long wait for pizza.

At 5pm, I was packing up to leave as instructed when the pizza arrived. I ignored it, left cash for what I had eaten and was ready to go. The confrontational waiter asked why I was not paying for my pizza. I haven’t eaten it, you told me I had to go by 5pm, I am going. I think he was more concerned not to get a tip, to be honest.

The waiter was shouting at me to pay the full amount, then a ‘manager’ was called. I explained – they had told me to leave by 5pm, and I was off. There were still maybe 20 people in the place, it was empty. They were extremely rude, but eventually I left and went to McDonald’s. I wrote to head office for the chain, but no reply of course.

It’s not for us to tell you what to do if you are visiting London. What we enjoy doing may well not interest you. Just look on some web sites, get a decent travel book and ask your friends.

What we can do, what we feel we must do, is tell you things we think you should avoid. Ignore our advice if you like, of course.

This is about food.

You will recognise all the usual suspects in London, McDonald’s, Subway, Starbucks, Burger King and so on. They will probably be very different from your local outlets. They may sell different things, the items may taste different (different ingredients tuned to different tastes), probably more expensive. If you want something special, say, X but with Y not Z, the server will look at you as if you are stupid and will probably give you a sharp no! No flexibility here, they don’t bend over to accommodate your needs. And more expensive.

The UK has a number of chain restaurants. Some are OK, others may well be best avoided. Cafe Rouge, Bella Italia, Garfunkels, Prezzo, Aberdeen Angus Steak restaurants and others seem, in our experience, to offer poor quality at inflated/tourist prices. Never has the microwave worked so hard. Some have been involved in a tips scandal.

Lots of pubs serve lovely food, but beware of these terms. Some offer an extensive menu at cheap prices. Others offer ‘home cooked‘ food, which probably means bought in frozen and microwaved. Some offer ‘home made‘ food. This usually means there is one item, maybe a few, highlighted with the words home made and they should be. It does not mean necessarily that all items are home made. If you are in a pub where you order at the bar and food is brought to your table, then tips are not appropriate.

We know people who object to certain restaurants because of the companies that own them. Pret A Manger had associations with McDonald’s in the past, Giraffe and Harris + Hoole is or were owned by Tesco.

It’s really hard, near impossible, to get a really cold drink in a shop. We don’t do ice.

On a different matter, Brits eat pretty much everything with knife and fork. Well, not fast food burgers, but everything else, even pizza. We know how to use cutlery: knife in the right hand, fork in the left. We don’t use one hand, we don’t cut our food up like baby servings, then swap a fork to the other hand to eat. 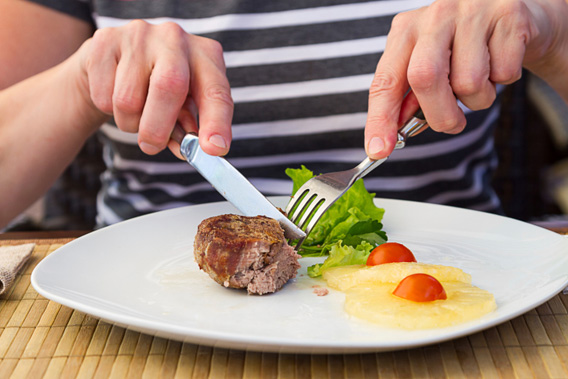 and it is probably the worst bad manners ever to use your cutlery like a dagger: 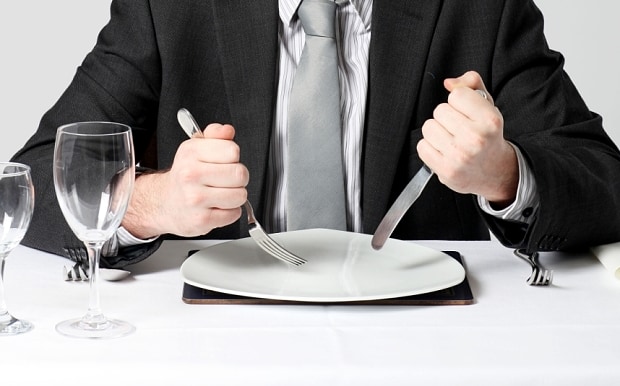 I have been watching videos about travel, to London and the UK. The advice given is often not good. Here is an example.

In the USA, you tip everyone. The man who makes your coffee, the delivery guy, the person who takes you to your seat in the theatre (not so common these days, but you should), waiting staff, cabin crew (again, not common but I have seen it happen), hotel cleaning staff ($2 a day upwards seems the norm, otherwise they will say you were smoking in your room and you get a hefty fine, usually $500+) and so on. Depending on where you are, the amount can vary but 20% of a bill or $5 upwards seems common. 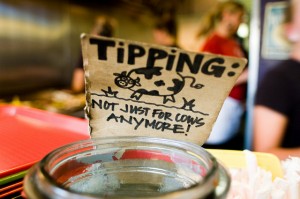 It’s a tricky problem, what to tip, and to whom. I don’t understand why we tip. Well, no, I do, it’s because the owners of companies pay low wages and staff need a tip to survive. And because sometimes you want to reward good service. But personally, I believe staff should get a good wage for what they do, and should not expect extra just for doing it. And certainly they should not get aggressive if they get no tip.

So, what are the rules in this country?

Let’s be clear who you do not tip. Coffee shop workers, pub workers, ushers, shop staff of any kind, people giving information or directions, people who bring your food in a pub, people who clean your hotel room, most people actually. If someone takes your order for food at a table, you may tip, but if you order at the bar and someone just delivers it, you don’t. There is a video saying that if you go to a pub often, you tip the barstaff with ‘have one yourself’. This is like something from a 1930s film or an episode of The Avengers. It just doesn’t happen. And chances are you’d get ‘thank you, but cannot drink while working’. Or you may just get politely brushed off. Don’t do it.

You can tip people who carry your bags in a hotel, if they take you to the room. Suggestions vary, but £2 a bag is generous.

One video from some woman from Florida on YouTube says that taxi drivers can be tipped by rounding up to the nearest pound. Well, firstly, taxi drivers did expect a tip, and could become aggressive if you didn’t give enough. After the financial problems, most appreciate anything, but rounding up may not do. For example, suppose you have a fare which is £49.95. Rounding up gives £50 and a 5p tip. Offering that and saying ‘keep the change’ is some insult. Use your brain. 10% or more will be appreciated. If you have no change, be honest. Say sorry, don’t have a tip right now, or maybe the driver can make change, but don’t be insulting.

Restaurants, of course, are the worst. Here are a few things to watch out for. Many in London, especially posh places (ie expensive) have a cover charge, maybe £5 per person. You pay this literally just to sit down at the table. Bread, water etc may not even be included. It’s the charge for them to put a cloth over the table.

Very many now add on an ‘optional’ service charge, 12.5% upwards. Sometimes it is ‘compulsory‘. You can tell them in advance if you don’t want to pay it. You may be refused entry, you may get spit in your food.

There are two reasons you may not want to pay it. One, because you got bad service, still pretty common over here, the other because you are paying by card. Let me explain.

Tips etc paid by card get taxed, so the Government gets a lot of it anyway. The money goes into the owner’s bank account. Some share the money between all staff, so your server gets little and many are paid under the minimum wage. Some companies keep all the money themselves.

You can ask for the optional charge to be removed because you got poor service (good luck – the police may be called) or because you wish to pay in cash.

Then, especially if you are paying by card, the little machine will be given to you waiting for a tip amount to be added in addition to the service charge. Don’t be conned. Even if there is no service charge added, try to leave a tip in cash if you can.

But, look at the menu and be aware what you are paying. Don’t be conned to pay twice. Oh, and as an aside, check the items and the total. Chances are it will be wrong.